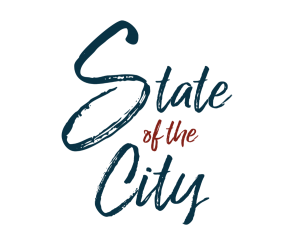 Be Featured in the State of the City Music Video!

Kern Dance Alliance is seeking dancers and movers of ALL TYPES to be featured in the State of the City music video presented by the Mayor’s Office and the Greater Bakersfield Chamber!

Do you shuffle? Do you strut? Do you swing?  Do you chasse? JOIN US!!

HOW: RSVP to let us know you will be there AND to save your spot on stage. Click the button below to register!

EXTRA: The State of the City will be televised on July 17 on KGET, as well as on the Chamber’s social media platforms.  The annual State of the City Forum is one of the community’s marquee business events. This event features Mayor Karen Goh and other city leaders providing insight on top issues facing Bakersfield, progress that has been made over the past year and where the city is heading in the future.

Choreographed in the 19th century, Swan Lake is a tale of forbidden love in a magical setting danced to the melodic music of Tchaikovsky’s Swan Lake. Live from the Bakersfield Fox: Swan Lake will showcase the famous Act II Pas De Deux where the Swan Queen, Odette (played by Tiler Peck), and Prince Siegfried (played by Roman Mejia) meet for the first time in the enchanted forest. The performance will delight audiences with the most technical movements performed effortlessly by today’s most famous ballet dancers.

It is no secret that the pandemic has greatly impacted the performing arts sector. Theaters across the country have gone dark, including the Historic Bakersfield Fox Theater who closed its doors exactly one year ago. Performing artists have been without work, and communities have lost the opportunity to see live shows. According to a recent Californians for the Arts survey, 72% of performing arts organizations terminated paid staff, and 50% terminated contractors. With reopening guidelines still in limbo, KDA, the Fox, and 23ABC are working to fill the void by bringing live shows back via streaming capabilities until theaters are permitted to open once again.

While the effects of the pandemic have been detrimental, there is a silver lining! Swan Lake will mark the first time Ms. Peck will be dancing on the Fox stage. Ms. Peck reflects on her feelings about her Fox debut:

"I have been fortunate to have had the opportunity to perform all over the world but have always wanted to perform in my hometown at the Fox Theater! This will be my first time dancing on the stage, and it means the world to me because Bakersfield is such a part of who I am. It’s where I was born, where my family lives, and where I first started learning how to dance. While most stages and theaters have been dark during the pandemic, it feels fitting that one of my first times performing live onstage again will be in my hometown!" 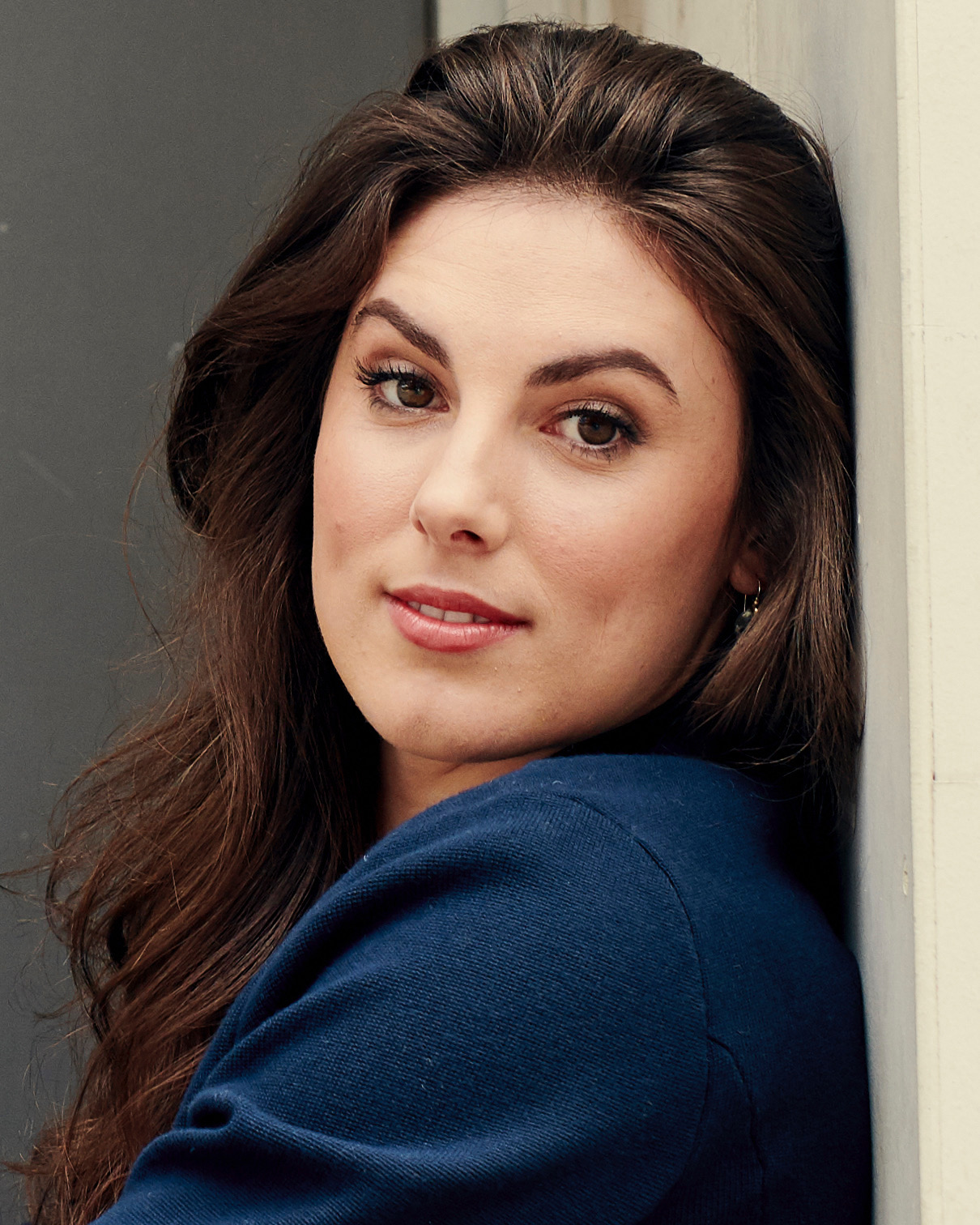 “It means a lot to me to be performing at the Fox theater during these difficult times. It’s been a very long time since I’ve danced on stage or with a partner, so I am truly grateful for this opportunity.” 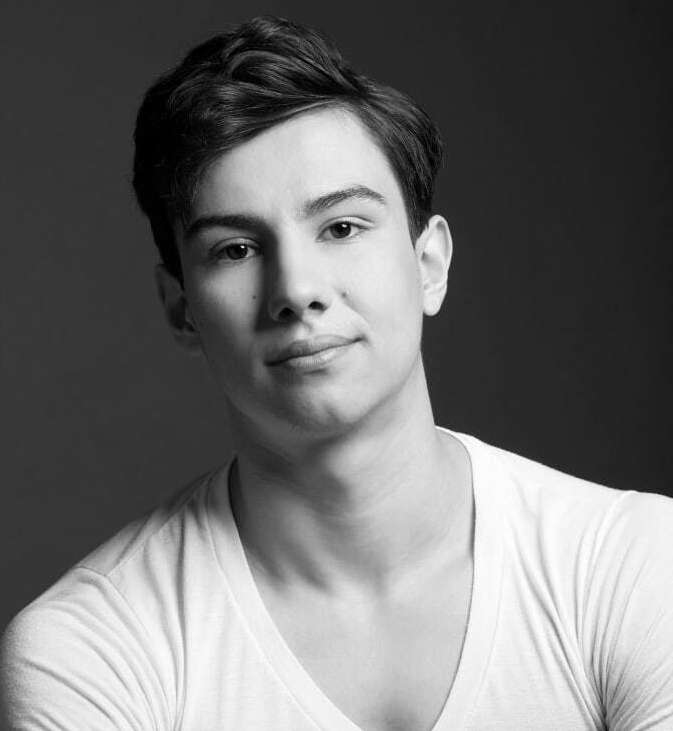 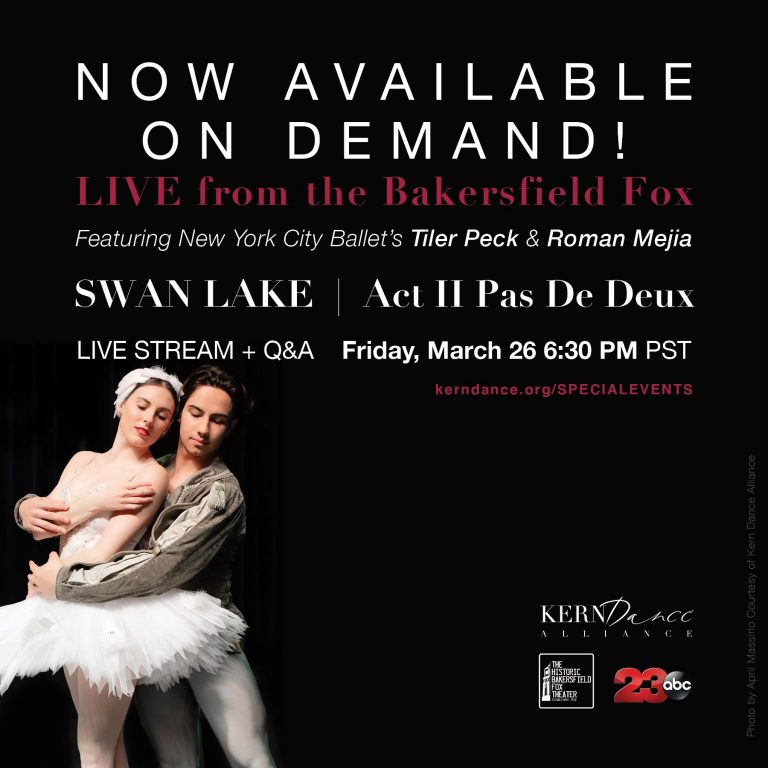 HOW TO WATCH SWAN LAKE on MARCH 26:

SUBMIT a QUESTION for the LIVE Q&A!

Do you have a question you would like Ms. Peck and Mr. Mejia to answer?  Send us an email, drop us a comment or direct message us on social media and then tune in on Friday, March 26 to see if your question was selected for the live Q&A!

Tiler Peck is an award-winning principal dancer with the New York City Ballet, an actress, choreographer and designer. As a curator, she launched and starred in the Los Angeles Music Center’s presentation of BalletNOW, a part of the Glorya Kaufman Presents Dance At The Music Center program. Her film credits include starring in the Hulu feature documentary – Ballet Now, appearing in Ballet 422 and choreographing the box office smash action movie, John Wick: Chapter 3 – Parabellum.  She has been featured on Dancing with the Stars, Julie Andrews’ Netflix series – Julie’s Greenroom, and the new Netflix series Tiny Pretty Things.  She was the FIRST ballerina to appear on the Ellen Show and she was named Forbes 30 under 30 in Hollywood Entertainment. Adding to Ms. Peck’s list of accomplishments, she is the designer of Tiler Peck Designs for Body Wrappers and she published her first children’s book from Simon & Schuster, “Katarina Ballerina” which is currently available for order!

Tiler is a Broadway star with credits such as The Music Man, On The Town, and Carousel.  She recently played the title role in Susan Stroman’s newest musical, Little Dancer, at the Kennedy Center.  She is attached to star in the production, now called Marie, for its Broadway run.

Ms. Peck was born in Bakersfield, California where she began her dance training at the age of two at her mom’s dance studio, Bakersfield Dance Company. She entered the School of American Ballet at 14, the official school of New York City Ballet.  She rose through the ranks of the ballet company, reaching Principal Dancer in 2009, a title she holds to this day. @tilerpeck

Roman Mejia is a member of New York City Ballet’s corps de ballet. He was born in Fort Worth, Texas and began studying ballet at age 3 with his mother and father. At age 13, he entered the Mejia Ballet Academy.

Mr. Mejia attended summer courses at the School of American Ballet, NYCB’s official school, in 2014 and 2015 before entering SAB full-time for the 2015 winter term.

In August 2017, Mr. Mejia became an apprentice with NYCB, and he joined the Company as a member of the corps de ballet in November 2017 at the age of seventeen.

His Principal roles include Peter Martins’ Romeo and Juliet, Balanchine’s Tchaikovsky Pas de Deux and Allegro Brillante, Jerome Robbins’ Fancy-Free, and Justin Peck’s Principia. He can be seen dancing annually as a guest artist at the prestigious Vail Dance Festival and is a 2019 Princess Grace Award recipient.

Because of people like YOU, KDA has come a long way since our launch in 2015! Our programs and services have allowed us to reach over 50,000 community members,but we aren’t stopping there. We have some BIG PLANS and we need YOUR HELP to keep moving Kern County.

Give the gift of movement and dance – donate to KDA TODAY!